Skip to content Skip to sidebar Skip to footer
Laman utama / iPad 3: What could Apple be planning?

iPad 3: What could Apple be planning?

September 27, 2011 Catat Ulasan
Now that the iPad 2 has shown its goods, what could Apple be planning for its successor? 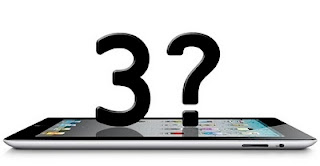 As soon as the first credible iPad 2 rumors started pouring in, many of the trusted anonymous sources began to report conflicting information. Some said the iPad 2 would get a redesign, while some argued the insides would be all that would see a change. Some were positive that a higher-resolution screen was on its way, and others said "nay." Shortly thereafter, a consensus began to take shape that not one, but two new iPads were in the works, and it was just a matter of deciphering which features we'd see on the iPad 2 and which additions were being saved for the inevitable iPad 3.

Now that Apple has revealed nearly everything regarding the iPad 2, the picture of what may be in store for the iPad 3 begins to clear up. Let's take a look at what Apple may have kept up its sleeve for its next next iPad.

Higher-resolution screen
Out of all the rumors swirling around the iPad family, screen resolution is by far the biggest that has yet to be addressed. Bumping up the resolution of the next iPad's display would be in line with the upgrade from the iPhone 3GS's 320 by 480 screen to the iPhone 4's 640 by 960 "Retina" display.

The simplest route that Apple could take would be to double the resolution of the 1024 by 768-pixel display on the iPad and iPad 2 to 2048 by 1536. This would achieve a pixel density of 270 pixels per inch (PPI), just a bit shy of the iPhone 4's display which boasts 330 PPI, and would ease the burden on app developers who wouldn't need to modify older apps to work on a new tablet.

Flash for one or both of the cameras
Again, falling in line with the design philosophy of the iPhone, it wouldn't be crazy to see Apple stick an LED flash on the rear camera like the iPhone 4 already sports.

FaceTime is a huge push for Apple right now and is likely to be in the future, so tossing a low-power light on the front-facing camera would solve the problem of making FaceTime calls at night or in a dark room.

SD Card slot
The rumor of an SD card slot coming to the iPad 2 was championed by a small number of sources, and seemed to be supported by early iPad 2 prototype cases. Those rubber iPad 2 enclosures appeared to sport SD card-sized holes, but were later revealed to be the slots that the SIM cards from a wireless carrier like AT&T use to connect a device to their network.

No further evidence has come to light to suggest removable storage options are in the works for a future iPad, and such a move would fly in the face of every mobile device that Apple has introduced in recent memory. The bottom line is this is one of the least likely features you'll see on the iPad 3.

Redesign
The iPad 2 cut both the physical size and weight of Apple's tablet considerably. Apple did this while still bumping up specs such as processing power, and was able to keep the all-important battery life at the same level as the original model.

A further redesign for the next iPad wouldn't necessarily be out of the question, but we're more likely to see subtle changes rather than another completely new enclosure. Apple has been a big proponent of aluminum unibody cases for many of their products such as the MacBook Pro and both iPads, so that trend is unlikely to change.
p/s: is waiting for iPad come to see me. huhuhu
credit

Catat Ulasan for "iPad 3: What could Apple be planning?"